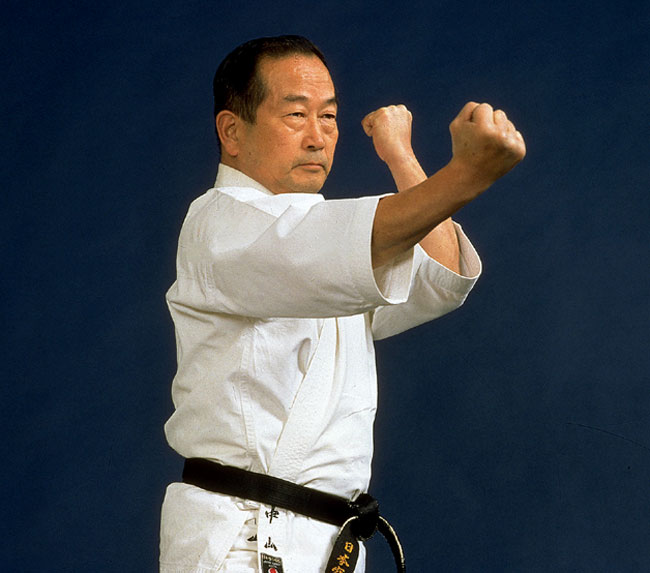 Nakayama, born in 1913 in the Yamaguchi Prefecture, Japan, belonged to a family who descended from the Sanada samurai clan and martial tradition ran through their veins. Both his father and grandfather were skilled in Kendo and were proficient instructors of the traditional Japanese martial art form.

Masatoshi Nakayama is a name that remains indispensable to Karate and is probably a name which was responsible for the globalization of this particular form of Martial Art. Needless to mention that no other person could have surpassed his contributions to expand Shotokan Karate around the World and take forward the legacy of the Father of Modern Karate, Gichin Funakoshi, thus establishing himself as the most able successor of the legendary master. Being the Chief Instructor of the Japan Karate Association (JKA), Nakayama is the man behind taking Karate beyond the Japanese border and establishing it as an art practised not only in Japan but as an art practised internationally by a vast diversity of people.

With a medical family background, Nakayama was surely expected to have followed his father's footsteps but he surprised all by securing an admission to Takushoku University in 1932. Interestingly enough, he was fascinated by the Chinese culture which had driven him to secretly appear for an entrance test for the Takushoku University, the premier institution for those seeking for a career in the foreign service. He got through the entrance and finally joined the University. On the other hand, though he had started training himself in Kendo art, yet it was his destiny that introduced him to the world of Karate and there is an interesting story behind this whole incident. Once, Nakayama had made a mistake in reading the timetable for his Kendo class accidentally found himself in a Karate class instead. Now, during those years, Karate was still a fairly new form of a martial art that was practised in Japan. Certainly enough, he was captivated by the novel moves and stunts of Karate that compelled him to stay back and watch the class. Soon, he made his mind to train himself in the art and started receiving his lessons. Initially, he was of the idea that his knowledge in Kendo and Judo would make Karate an easy task for him but slowly, he realized that it was no child's play--he understood how difficult this form was. Blessings showered on him and he began his training under Master Gichin Funakoshi and his son Yoshitaka which harboured his love for karate as a lifetime affair.

His devotion to Karate did not however divert his love for studies and after completing his University, he went to China for further studies in Chinese language and history. Simultaneously, he continued with his karate practice in China and even imparted some training classes there. It was there that he got acquainted with Kung Fu training under the influences of several masters. However, among them, Sifu Pai was his primary teacher and along with him Nakayama learnt about a Northern Kung Fu Style which is yet another fascinating style of the Kung Fu form.

Long stances, deep punches and high flashy kicks are what make Northern Kung Fu Style so very enthralling. Under Sifu Pai's guidance, Nakayama also trained himself and became adept in Taisoku Uke (pressing block with sole of foot) and Ura Mawashi Geri (reverse roundhouse/hook kick). Later on, both of these techniques had been introduced and incorporated into the Shotokan curriculum, but surely with the consent of the Honourable Master Gichin Funakoshi.

His life took a pathetic turn during the Second World War when, it has been known, he worked as a translator in China. Like millions of other people, Nakayama also fell a prey to the scythe of the 'demonic' war and in 1946, he returned to Japan, completely ravaged and devasted by the horrific warfare. He searched for some of Funakoshi's senior students and tried to get in touch with them but all his attempts went in vain---most of them lost their lives during the war. Misfortune continued to play its part and Funakoshi's son, Yoshitaka, died from tuberculosis. Nakayama was left in near desolation but his inner strengths kept him firm and ultimately, in 1947, he came into contact with a handful of Funakoshi's senior students who had survived the Second World War. They were all gathered by Nakayama and they resumed their training under the vigilance of Master Funakoshi.

In an interview published in the Black Belt Magazine in November, 1982, Nakayama said :

"It immediately became apparent to me and to Master Funakoshi that if we were going to teach the Americans, we would have to provide a theoretical basis for our art... "

Hence, with Master Funakoshi's instruction, Nakayama initiated an intensive study of kinetics, physiology and anatomy with a view to bring forth a scientific grounding to Karate as well as the body dynamics it involved.

It is said that there is a silver lining behind every dark cloud and it was true for Nakayama as well. He moved on with his life and in 1948, Nakayama along with other senior students of Funakoshi, demonstrated some karate stances to the personnel stationed at the U.S. Air Force Base at Tachikawa. They received appreciation and Nakayama got the opportunity of travelling around Japan to present demonstrations and teach karate to the Americans, in the next few months. In 1949, the Nihon Karate Kyokai---Japan Karate Association (JKA), a name which doesn't require much introduction in the present times, was formed by Nakayama and some other senior students, with the humble permission of Master Funakoshi. Master Funakoshi honoured as the Chief Instructor with Nakayama as the Chief Technical Advisor of JKA. In the year 1951, Nakayama witnessed another important learning experience when American Air Force personnel were sent from the Strategic Air Command (SAC) to gain some knowledge in various Japanese martial arts, Karate being one of them. The Americans were inquisitive and showed eagerness to know a lot about the theoretical background for performing techniques in a particular way.

Nakayama was of the belief of moulding karate in such a way so as to include some of the competitive elements like that of Judo Or Kendo which would enable people hold on their interest and curiosity in the art of Karate. He received permission from his Master, Funakoshi and started exploring the various ways of introducing a competitive element in Karate. He looked into many aspects, like including a form of light armour for the competitors, something similar to Kendo practitioners. However, even this brought about injuries.

It was Masatoshi Nakayama who, with the assistance of Teruyuki Okazaki, formulated the JKA's Instructor Programme in 1956, with the intention of considering it as an intensive one year karate course. Eminent persons like Master Takayuki Mikami and Master Hirokazu Kanazawa occupy the list of the first graduates of the course. Along with the intensive Karate practice, a theoretical grounding in Karate was provided to the students. The students also received knowledge on kinetics, physiology and anatomy and they were also made aware of the key principles of other fighting systems. Many of those students, who graduated in the programme were sent across the world so that JKA's brand of Shotokan could be exposed globally and this expanded. Kanazawa, one of the first graduates spent some time in Europe while Mikami was in United States

Unfortunately, in 1957, Master Funakoshi took his last breath thus bringing down grief onto the Karate world. It was a great loss for all the masters and the students of Karate. However, things must go on and after few months of the tragic loss, the first ever JKA All Japan Karate Championship was organized at the Tokyo Metropolitan Gymnasium which was definitely a moment of pride for the members of JKA and Japan as well. Hirokazu Kanazawa won the Kumite title and the Kata title was conferred upon Shoji Hiroshi. The event was a grand success and it continues to be held annually till this day.

Nakayama followed the ideology and principles of Master Funakoshi and hence believed that competitions were not merely about winning. He looked up at competitions as just another part of one's training that builds up one's character.

Nakayama's life and career reached another milestone in the year 1965 with the publication of his book, "Karatedo Shinkyotei (A New Method for Teaching Karate-do)". The book was published in English as well and was titled as "Dynamic Karate". In this work of his, Nakayama had shared much of his knowledge gained from his studies in kinetics, physiology anatomy. Any martial artist who takes up the art with serious devotion should possess and read this book to gather scientific explanations on how certain techniques work.

JKA had always had Nakayama as their true mentorand guide through all thick and thin during the early years and it was because of the Master's hard work and love for his work that JKA achieved the stature of being recognized as one of the biggest and the most respected Shotokan associations in the world. According to some students who were blessed to have received his training, have described Nakayama as a tough yet a fair teacher. In later years, some of Nakayama's able students had attained success and received fame as Masters in their own right. Mention must be made of some of Nakayama's distinguished students, whose names can be found in his "Best Karate Series", are :

Nakayama was also an accomplished ski instructor but in 1971, he met with an accident at the hands of an avalanche, which had almost cost him his life. Doctors had initially given up all hopes but with time and treatment, they could save his life but had concluded saying that he would never be able to walk. However, an unfettered Nakayama, with all his might, returned with a full recovery and resumed his usual active schedule, be it travelling around the world or conducting various courses and seminars in Karate---all were done at a full swing.

Master Nakayama was the first living master who was awarded the 9th Dan. He never let any incident, big or small, refrain him from travelling around the world and presenting seminars or delivering courses to the members of JKA till he breathed his last at an age of 74 in the year 1987. He was awarded the 10th Dan posthumously.

After losing their guardian, many of the top ranking instructors involved themselves in petty politics and broke away from JKA to form their own associations. Nakayama, like a parent had always kept JKA under one umbrella, and nurtured it with love and care.

It can be very well mentioned that there exists no other man who has done more than Nakayama, to promote the growth and expansion of Shotokan Karate around the world. He will always remain as a man of excellence and high respect in hearts of not only Karatekas but also all the common people in generations to come.